Phew! Summer has reached the long month of August and it continues to be hot and muggy in almost all of the U.K.

It’s still the holiday season, if a little exhausted by now.

Many people fly away to foreign climes and shores, but what about taking the time to uncover the beauty and interest of our British beach-towns... no foreign tongue, no tipping expected, no air-travel, no sharks. Mostly you’ll find endless entertainment, interesting experiences and/or absolute peace, depending on your nature.

We have warm evenings and an easy-going nature and so much coastline to offer something unusual and exciting, just trace the outline of the U.K. and stick a pin in the part you want to explore.

Then pack a few items and a book to read and re-discover your country again and again and tell everyone that Britain is brilliant (with examples to explain).

When you travel somewhere new, you visit another life and another world even if it’s still lovely Blighty, it’s just different. You bring along a GOOD book which will transport you somewhere new too. So two holidays in one trip. ‘That’s the way to do it!’

Photo: Welcoming the Red Arrows over the cliffs in Hastings, East Sussex. Our very own Jet-setters! 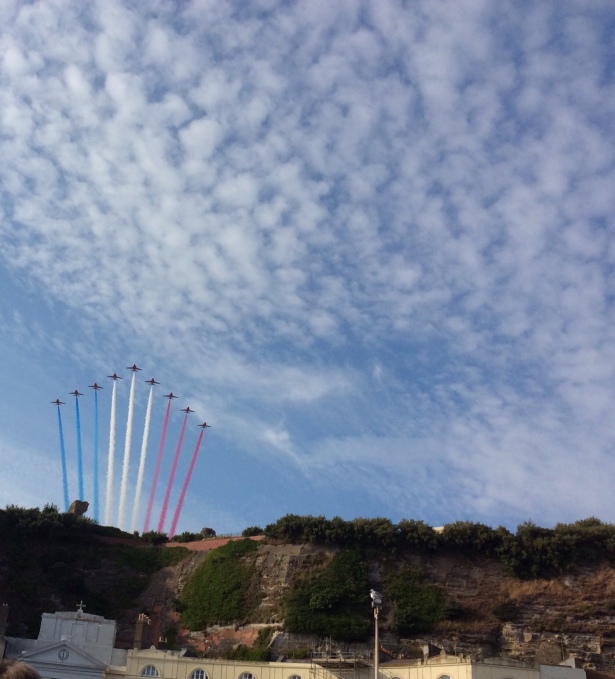 I’m VERY happy to announce that my new novel

is NOW available to buy through my website http://www.katebarnwell.com (signed copies with bookmark at £7.99 plus p&p). Please take a look.

‘I never fully understood where I fitted in or what to do with what I had.’

What alignment of planets brought about the meeting of two souls – Mothy Chambers, a 16-year-old struggling with adolescent uncertainties and Bette, a mesmeric young woman, settled in the unique southern French town of Collioure? He, sent direct from English boarding school to France by an indifferent family; she, the recently arrived, new wife of his host.

In the warmth, colour and skies of this small town, extraordinary lives are being embraced.

Mothy returns to England and he and Bette maintain a long and mutually confiding correspondence as he struggles to give meaning to his life. Gradually as his memories unfold, he starts to understand the relevance of his earlier times in France; he remembers how important and special this town was to so many people before him and it’s indisputable effect and transformation on those who came calling.

Mothy reflects on the enchantment of Bette, and wonders if the sudden disappearance of his oldest friend is the key to the purpose of his own ordinary life.

Many thanks to those who have supported my work in the past.

Also available, if you must…

‘In like a lion, out like a lamb!’ is the sweet little proverb often associated with March.

We began the month with biting cold winds, hazardous black ice and blankets of snow; the fierce roar of winter raged on… and Spring was kept deep below the soil.

The origin of the proverb is to do with astrology.

Leo the lion is the rising sign, the sign in ascendency but by 21st March (to 20th April) Aries, the ram, arrives (lamb sounds better than ram).

March is, can be and may have been a difficult month for some. The month has several associations with erraticism:

‘Mad as a March hare’

and Misfortune ‘beware the Ides of March’ from Shakespeare’s ‘Julius Caesar.’

This was spoken by a soothsayer warning Caesar of his portentous downfall.

When Caesar’s frosty reign ended on the 15th, it was nearly Spring.

The 25th March marks the change of clocks, with an extra hour of evening light…longer, lighter days are here to enjoy, providing the weather is kind.

Easter sneaks in at the end of the month too and then on Easter Sunday we awaken to April.

My new novel: ‘A Worldly Tale Told Of Mothy Chambers’ is available, signed, via kate@katebarnwell.com

Let me share a quote with you that seems appropriate in the current ‘crazy’ weather climate, affecting a vast number of people across the globe.

Here it is, direct from the Edinburgh Fringe comedy festival, a sometimes quite rainy area of land inhabited by Scots:

“I like to imagine the guy who invented the umbrella was going to call it ‘brella’ but he hesitated.”

Um, firstly I think it’s rather presumptive to assume it was a man, but let’s think of the ‘he’ collectively.

The name umbrella evolved from the Latin umbella – a flat-topped rounded flower and the term umbra, meaning shadow or shade. In Italian, Latin’s closest modern-day language, the term for shade is ombra and for umbrella, ombrella.

While we play with names and definitions here are a few more of notable interest:

Un Parasol (French and Spanish) protects against the sun, para means stop or shield and sol is sun.

A Parachute (English, French) – para (shield from) a fall.

The oldest reference to a collapsible umbrella is 21AD in Ancient China. Then we follow the umbrella, in all its forms, through the traditions and customs of dynasties such as Ancient India, Siam, the Middle East, Ancient Egypt, Ancient Greece, Ancient Rome, the Aztecs and Europe.

In The Middle Ages (of Britain) a cloak, not an  umbrella, was often the desired clothing against rainstorms.

‘Those who do not wish to be mistaken for vulgar people much prefer to take the risk of being soaked rather than be regarded as one who goes on foot; an umbrella is a sure sign of someone who does not own his own carriage.’

It would not be long before umbrellas became a fashionable item; an accessory not only to shelter from the rain but to avoid the heat of the scorching sun (the sunbeams being particularly piercing in India, for example).

By the 1750s the British people had got over their natural shyness and promoted the umbrella’s general use.

One such character, Jonas Hanway, founder of the Magdalen Hospital, dared the reproach and ridicule – the staring, laughing, jeering, hooting, heckling and bullying – of hackney taxi-cabs, of carrying an umbrella in London, everyday for 30 years, dying, nice and dry, in 1786.

There is a small street in London’s Fitzrovia, leading from Oxford Street winding itself to Tottenham Court Road, called Hanway Street, reputed to be named after our man. His popularisation of the umbrella was more successful than his attempt to introduce stilts into London, keen to avoid the muck and grime of the 18th century streets.

Clearly he likes the theme of ‘avoidance.’

Ironically Umbrellas are the most ‘left’ items in taxi-cabs.

They are sometimes extremely annoying but desperately useful articles, not everybody wants to ‘sing in the rain’ or have ‘raindrops keep falling on their head’…
Global National Umbrella Day is 10th February.

What better way to spend the bank holiday weekend than down on a British beach, with summery British weather & a wild mix of British people all having a thoroughly good time. Everyone entertained by Hastings Old Town, spending their English pound and speaking in their English tongue, turning pink and trying new things. Watching and observing, or taking part and letting go.

The weekend started with a big Boyzone concert on Hastings Pier. Ronan Keating and fellow Irish lyrical lads were singing till late, out at sea, under an orange moon and far from the madding crowd. Girls were ecstatically happy, the boyfriends were less-than pleased.

Safe parties on the beach, picnics, swimming, sailing, church-bells, wrapped fish and chips to individual tapas, it can be original or fancy, working classy to posh and arty.

By next week this pebbly beach will be a desert, not from stones to sand but from lots of people to very few. But it won’t be long before we can fish out and dish out a new festival, The Seafood and Wine Weekend, in 3 weeks, for example: the celebration of British wine and seafood; a feasting festival, with plenty of live music and tipsy-ness.

Wherever you are in Britain, I hope you’re taking full advantage of the last, long bank holiday of the year. It is still summer, despite an early crop of apples, signifying a shift into autumn.

Today, 21st December, is the shortest day of the year in the U.K. – known on the calendar year as The Winter Solstice.

If it is a grey day (& it is) it’ll seem exceptionally short, and the light will be poor and bland, if it is sunny (maybe tomorrow) make the most of the rays as a lack of sunshine, especially around the Christmas period, can make you feel very low.

On the positive side, the shortest day of the year will now give way to a gradual lengthening of days. This means that the cloudy, misty, oppressive days will become longer ones, so even more reason to grab the sun when it rises and shines.

A short pre-Christmas day is best spent enjoying the colour of the festive lights, fiddling with wrapping paper and sticky, pretty bits of string, reaching for a spicy, warm mulled wine and filling the house with scents of cinnamon & orange and roast potatoes. There are lovely ways to spend this seasonal month and many pleasures to gain from living the cycle of a temperate climate, even in those darker days.
Follow my blogs http://www.katebarnwell.com

‘A sight so touching in its majesty’ (Wordsworth)